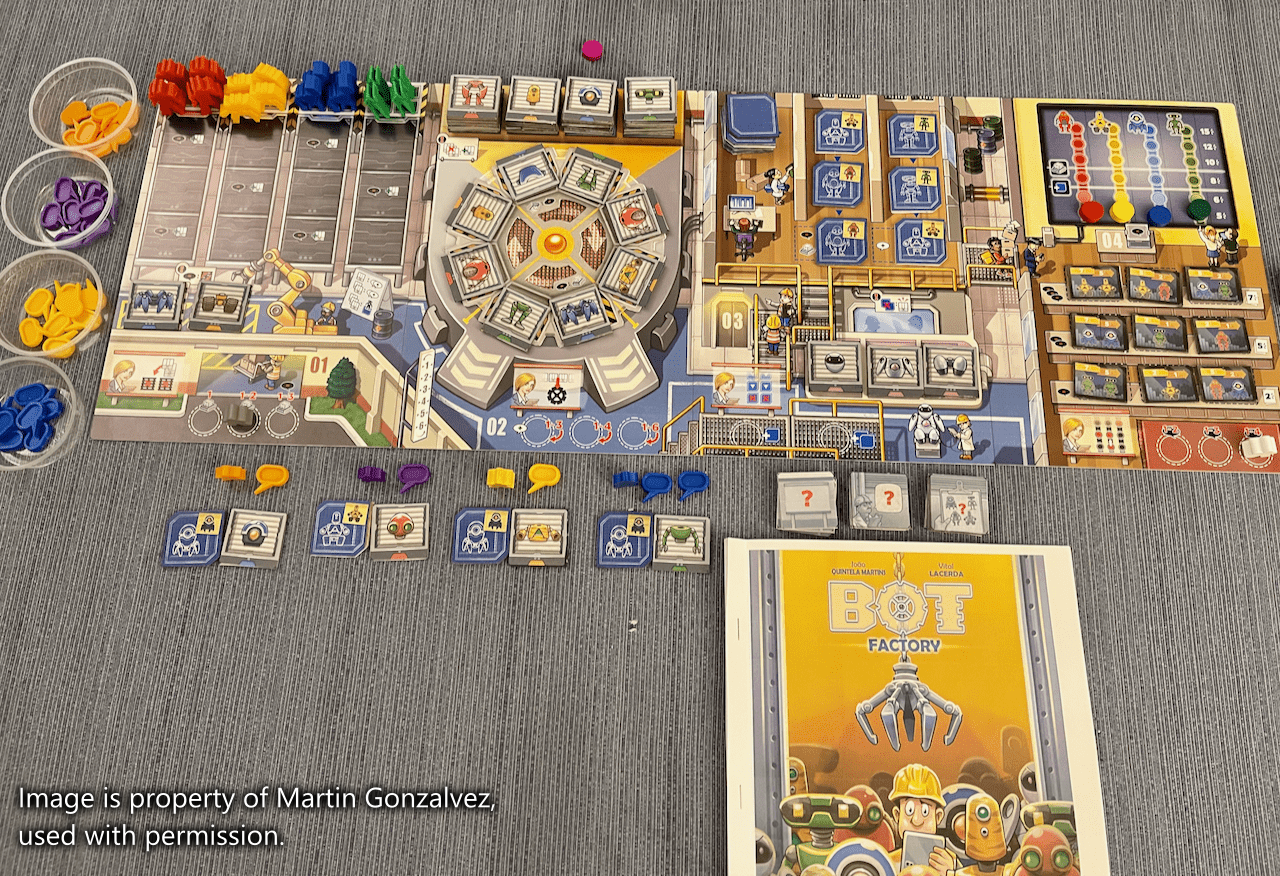 Martin runs the awesome little Print and Play Hideaway group on Facebook and is, as far as I can tell, the king of table presence when it comes to PNP’s. Why? Let’s walk through some of his great builds and a few of the techniques that he uses.

I like the thick, clean tokens in his Bot Factory build (shown above). You can also see his work below in the tokens that he made for Age of Comics. He prints onto sticker paper for many of his builds, then pastes it onto chipboard. He walks through the process in this YouTube short and compares cutters here.

For this game, he used “thrifted Scrabble tiles” (brilliant). He covers his work with Rust-oleum Satin Clear Enamel to protect the finish.

In addition to the little tiles above, the game requires some bigger tiles displaying pictures of comics. For these, Martin acquired some little rectangles of vinyl flooring. His favorite glue is 3M Super 77 spray glue, which bonds to a variety of materials.

Martin received a MonoPrice 3D printer in 2021, which he’s put to very good use. I think his first project with it was the build of Fantastic Factories, but he’s been using it on several builds since. I really like the robot-ish meeples that he printed and repurposed for the Bot Factory build.

One step up from meeples is standees. Martin has a whole video about how to make standees. One approach, used in Escape From Innsmouth below, is to create little inserts in plastic holders like those below. Another approach is to print onto bits of vinyl flooring clipped into metal binder clips. The video walks through his cutting tools, including a “chomper” used to make nicely rounded edges on vinyl.

Escape from Innsmouth, above, also includes a 6-fold game board. As explained in a handy video, Martin used “24 pt BCW magazine boards” for the backing in this case. He glues together a couple of these boards to make the board thicker. The tricky part of joining the edges requires a tape, for which he uses duct tape but also mentions book-binder’s tape.

Martin is really handy with creating custom dice, too, as in Buddy Cop below. He uses sticker labels for this, firmly sticking them directly onto dice blanks. He doesn’t mention any further steps, but I could see carefully spraying (and drying) each face with the Rust-o-leum for protection.

Having made quite a few physical game prototypes myself, I most admire Martin for his clever and thoughtful use of materials and for his meticulousness in carefully cutting and assembling pieces. In doing so, he shows an appreciation for the effort that the game designers and developers put into the creation of compelling components. And he achieves an enviable level of table presence as a result!

I asked my fellow groupies at the PNP Hideaway for their “top tips at achieving awesome table presences with a PNP.” A few of the responses:

And Rich said we should simply be Martin Gonzalvez. Couldn’t have said it better myself.