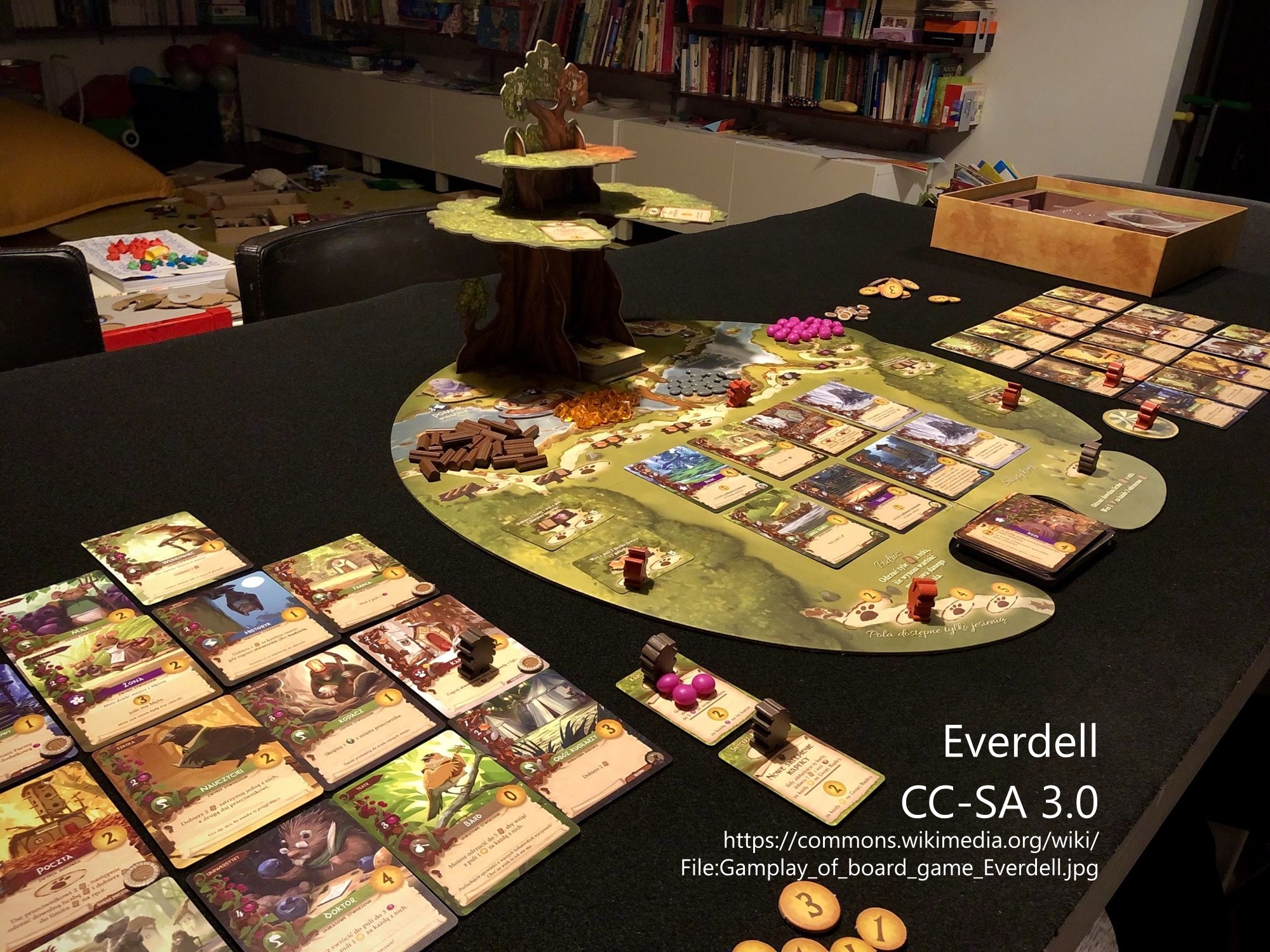 “You can’t mention table presence without mentioning the Everdell tree” — thus saith Prometheus Game Labs, and truly so. Rising above the table, the Everdell tree draws attention to the table from across an entire convention hall — or basement (pictured above, courtesy of Daniel Mizieliński). Prometheus concluded, “Thanks to improved design tools, easy prototyping with 3d printers, and the ability of manufacturers to produce more complex and detailed moulds and materials. I expect to see a lot of successful games in future with components that differentiate them and stand out on the table.”

This comment got me thinking about what other kinds of components come to other bloggers’ minds when they mention table presence. Is it really all about jumping off the table? Or are they also thinking about uses of color, hyperbolic shapes, and making noises while getting players to move their bodies more?

I had to do a quick, informal scan of what bloggers mean by “table presence.” Here’s a quick rundown of what I found…

The most frequent factor mentioned in association with table presence was the amount of table taken up by components.

Swords and Chit, writing about the map of Red Alert: Space Fleet Warfare, said “that map filled the entire table, giving the experience a feel of being epic in scope even though it easily could have been much smaller and still been a great table presence experience.”

Likewise, Cardboard Clash commented on the cards and big board of Sensor Ghosts because “The components look nice and it has a sprawling table presence” — which wasn’t entirely a positive because it’s a light and fast game that didn’t seem to fit with a big sprawl.

You don’t need to have just one single wide component. For example, Cardboard Clash played World of Warcraft: The Card Game and enthused, “The oversized Hero cards that came in my starter set were a nice touch, too, adding some extra table presence in a completely unnecessary but enjoyable manner.” I’ve never played that one, but as far as I can tell from other sources, most of the game’s cards were standard poker size, but a special “Battle Deck” contained 3 even larger cards.

After wideness, the next most oft-mentioned attribute was verticality, as in the discussion of Everdell at the top of this post. In addition to the Evertree, Prometheus mentioned several edifices: “Tekhenu Obelisk, and the Viscounts of West Kingdom Castle.” The Friendly Board Gamer also took note of the tree.

Smaller standees can achieve table presence with less verticality. Dave at To the Table liked the cardboard knights in Jungle Joust “due to the 3-D nature of the jousting field.” The game also apparently has a cardboard rail around which the knights ride as they joust. Similarly, Fistful of Meeples wrote about Dance Card that “the large selection of Standees representing students and faculty gives Dance Card a nice table presence.” Interestingly, this was followed by a comment that flat tokens might have been more readable.

Color, particularly but not exclusively in artwork, seemed to be equally important as the next factor.

To the Table wrote that a Bible-themed game, “Commissioned itself makes for a wonderful table presence. The artwork is gorgeous, especially the game board itself.” As with Red Alert, the board depicts a map (in this case, of the Roman world). Boardgame Gumbo appreciated how the art and colors of Big Easy Busking match the vibe of New Orleans and draw attention.

Boardgame Gumbo said that Downforce attracted the interest of some recent college graduates because “the table presence intrigued them, with the colorful little racers, and the large board with the oversized track.” This is a vote for color, as well as a wide sprawl, but notice that it’s about the color of the miniatures rather than the color of the board.

To the Table said, “I personally own the gold edition and love the look and feel of the metal dragons” in Dragoon. The dragons are big, heavy, and shiny. Notice also the reference to feel.

Oakleaf Games “got some Ice Cube tokens in just in time for use” at an Unpub, which “were perfect, and so cool looking.” These are basically glimmery little acrylic cubes. The Friendly Board Gamer liked the fact that Everdell’s “components are very tactile,” alongside a picture showing resource tokens.

The dragons and ice cubes, above, got attention in part because of the nature of the materials involved. These materials delivered a tactile benefit, complementing the visual appeal.

Oakleaf gave another example. Regarding an apparently plain green mat, they wrote, “I took my neoprene table mat, which probably got as much interest as my games. But it drew attention because it looked really nice.” This was in 2017, and I don’t see many Google results from before that time, so I’m inferring that the allure of the mat wasn’t so much its appearance as the apparent novelty of its material.

For me personally, I find that the combination of a big colorful board and detailed miniatures really grabs my attention. I hadn’t thought a great deal about the fact that using new kinds of materials can contribute to table presence in new ways. In the future, I think I’ll make a catalog of affordable new materials now becoming available, which might be useful for designing games.

In the meantime, what factors drive table presence for you, beyond height + width + color + sparkle + material? Do I really have it all covered?