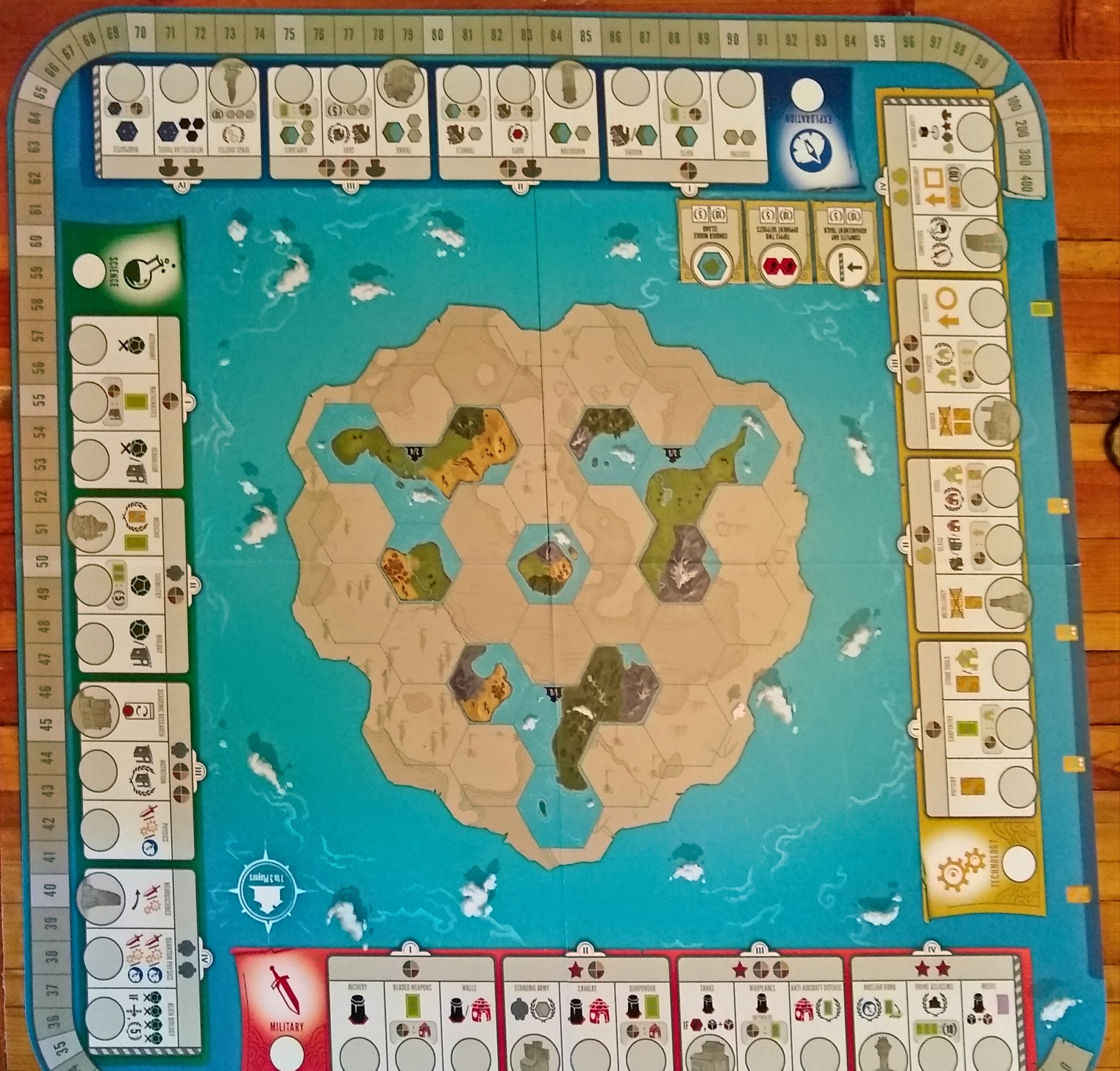 My gut sense is that a tech track is a series of increasingly powerful capabilities. As such, I mentally visualize it as a linear or tree-shaped organizational structure on a board or mat, with some sort of icon or area corresponding to each capability. In fact, the tracks of Stonemaier’s Tapestry perfectly match this intuition.

This intuition is wrong, however — or, more precisely, it doesn’t actually capture the full range of what designers and players mean by “tech track,” nor does it fully capture the range of different ways to represent a set of technologies.

Board Game Geek defines the Tech Tree / Track mechanic as, “During the course of the game, new Actions become available to specific players, or existing Actions are improved. These are often themed as Technologies, but do not need to be. Sometimes this is expressed as a Tree, where gaining one Tech unlocks multiple other Techs. Or it can be a track, where advancing along the track unlocks upgraded or new Actions.”

For what it’s worth, when people talk about a tech tree, they often mean a lattice because each tech may have multiple requirements (dependencies) that must be met prior to the establishment of that tech.

Sid Meier’s Civilization: The Board Game

Civ is probably the quintessential game with a tech track. Man, I wasted so many hours playing the video games before I ever saw the tabletop version. Players can invent technologies only after inventing prior technologies. These then give boosts to production, etc.

The tabletop game represents these technologies as cards. Small, very hard-to-read icons show their relationships, such as their level of power. It’s up to the player to place these cards in a way that keeps them orderly, and they generally don’t end up being a tree, which kind of takes away a lot of the fun and the thematic feel from the video game.

BGG lists Innovation as having a tech track. Like Civ, Innovation has cards that you can obtain with increasingly powerful effects that you can activate. The game categorizes these cards according to age, but you don’t necessarily sort these by age when you place them on the table. Instead, you stack them into 5 piles by color, corresponding to their technological focus (biology, military, society, government, and science). You’ll sometimes cover a tech with a weaker tech of the same color.

BGG lists Scythe as having a tech tree/track. That was a real puzzler for me. There are no tech cards, nor any big tracks like those of Tapestry.

I think what they’re referring to are the tracks from which you move upgrade cubes and other tokens. As you do this, you reveal more powerful actions within those same areas of your mat. It’s a system that has found extensive use in many other games, such as Eclipse — although that game also has increasingly powerful tech tokens, as well, which you acquire and organize onto your mat.

BGG lists a total of 166 games that use the tech track / tree mechanic (as of today). These include…