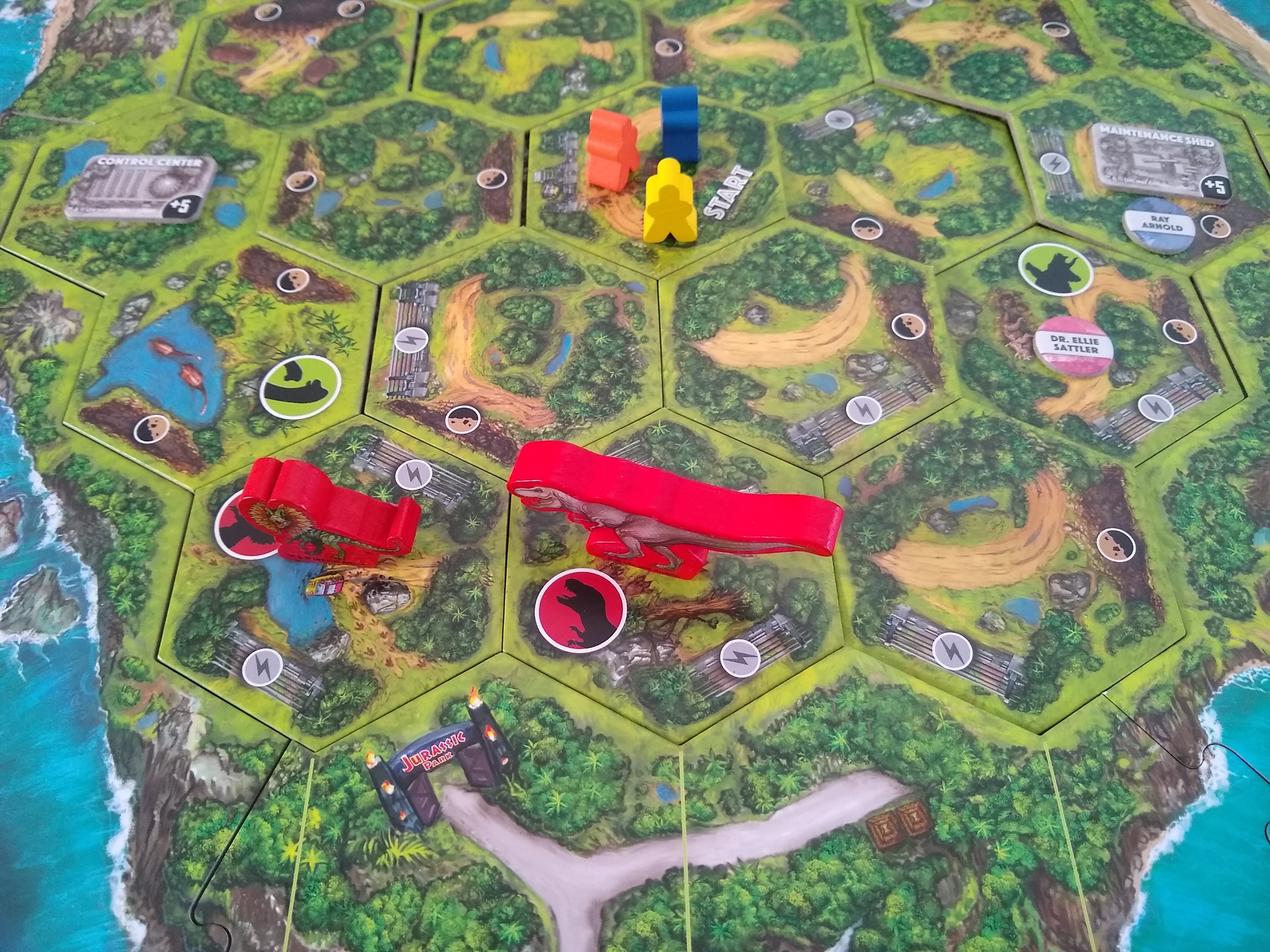 Ravensburger’s choice of player tokens in Jurassic Park correlates closely to the mechanical aspects of the game that stand out most in players’ minds.

Yes, I’m talking about those dinosaurs. They’re big. They’re red. They’re silkscreened. They have long tails and nasty teeth. They’re clearly the star of the show.

The player controlling these dinosaurs tries to use them to hunt down and eat all the other players, each of whom controls a little meeple. That meeple represents a character from the movie.

Not only are the meeples tiny, but they have exactly the same shape. (If you are color-blind, you might have some trouble telling them apart.) This, despite the fact that meeples come in many different shapes for no significant additional cost. All of this subtly communicates that the meeps are as interchangeable as goldfish crackers.

Moreover, Ravensburger used still photos of the movie characters, rather than hiring an artist to draw fanciful new representations of the characters. This is absolutely reasonable considering Ravensburger’s marketing strategy and the amount of money that they presumably paid for rights to use the movie. But that art choice also subtly reinforces the fact that the players’ fate will likely match those of the movie characters. For fun, let’s review those outcomes, shall we?

The pull quotes on the players’ mats even further emphasize that the players are probably going to die. Dennis says, “It’s nothing to worry about” (mentally insert This is Fine meme here). Ellie says, “I’d like to… finish with the trike” (just a few moments before an ominous thunderclap). Ray says, “Three minutes, I can have power back on” (suuuuure you can — except of course that you end up dead).

All of which is to say that most movie characters died, and the players very closely follow the roles of the movie characters, so they can reasonably expect to die, as well (at which point they respawn). And in point of fact, many players have dinged the game because the dinosaurs have more types of actions, more powers, more devastation, and more opportunity to win if the game drags out.

The humans are right to be frustrated and scared.

They are, after all, nothing but meeples.

Ever feel that way in any other tabletop games?