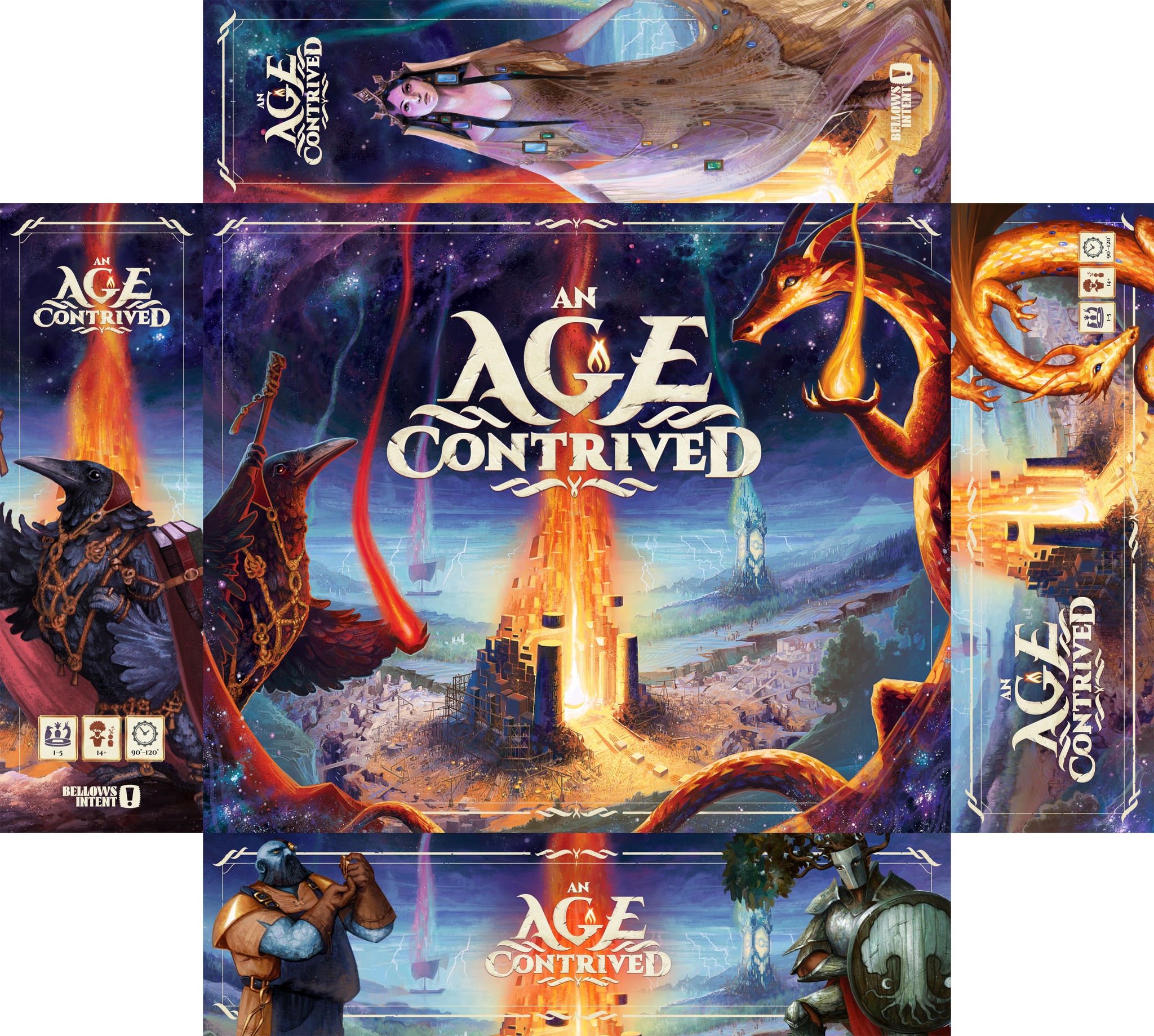 Designing a big box presents different challenges than a small box. There’s less pressure to squeeze tons of information into a tiny (let’s face it, insufficient) amount of space. On the other hand, a big box raises the bar in terms of how much information and emotion the illustrations and graphic design must convey. More square inches means more power. And–as all Spiderman nerds know–with great power comes great responsibility.

When Chris Matthew posted a draft illustration (above) for An Age Contrived, it immediately captured my attention. I asked him a few questions about the creation and evolution of the art to where it is, and I’ve edited his answers (italicized) for clarity and succinctness. I’ve also added a few comments of my own (not italicized).

Can you share an early prototype? What feedback did people give?

Here’s an early box prototype/sketch. I asked for feedback in my game’s Facebook group. In response, I received no clear suggestions, but people seemed to like the apparent tension between the two characters.

When Chris shared this picture during our conversation, I was struck by how well the characters contrasted in value with the background. They just pop out perfectly, while also helping to frame the rest of the image with their bodies and finger-smoke. At the same time, the title covers too much of the background, preventing me from seeing what I assume is the heart of the game.

I note that he said he received no clear suggestions from his own Facebook group. I have seen him post to the BGDL group and get feedback on later versions–potentially illuminating the value of different groups for different purposes.

Can you give an example of a second prototype? What changed?

I changed the perspective of the landscape, and the pose and mood of each character.

We’re getting a spiritual vibe now

With this version, I can now more clearly see the rest of the buildings. He’s had to add some white silhouetting on the characters to contrast them with the night sky. The buildings have gone from building to burning — perhaps a sacrifice to these two spiritual sort of creatures?

What are you most proud of, in the final box? Does any aspect of the design still concern you?

I’m most proud of how the box depict what players are actually doing in the game. My main concern is that viewers could think that the monuments on the box are being destroyed, when in fact they’re being built.

Do they need to be flames?

Yes, it’s also my impression that the buildings are being burned, mainly because of the red coloration emerging from the lead building. Moreover, that coloration shimmies into the night sky in with exactly the same winding, weaving way as a flame. If the coloration was green instead of red, or if they looked more like they were simply glowing with an unearthly power, rather than smoking into the sky, then they would look less like they were burning. Replacing the long trails of fire with unearthly glowing blobs might also help prevent the observer’s eye from tracing the smoke lines into the sky and off the top of the box.

Nonetheless, the illustration is awesome in many other ways

Aside from this detail, I absolutely love the final box art. Here are a few reasons why:

The box makes me feel emotions of curiosity and serenity. Not having played the game, I can’t comment on the appropriateness of this mood. Mystery and serenity seem compatible with the game’s description on its website. However, I can’t tell from that website either how the players will feel while playing.

One commenter on the image’s Facebook thread said that the illustration “expresses more loneliness, wild life and adventure, a hero’s journey, or something oniric. Not really a city building nor the Sims vibes.” I had to look up what “oniric” means. It refers to dreams. And I can see the point here. Although there is indeed scaffolding around the front building, the appearance of flames may prevent the interpretation of this as a building game. Another person wrote, “Freaking awesome” but also “Looks more like a city under siege by the dragon and bird.” Another wrote, “the dragons are destroying the middle city/tower with fire.” More flame problems.

One person wrote, “The cards in this game are superb and this cover is a great intro to what we will find in the box. Great job.” It seems like the flames are really the only big issue remaining. and there’s a straightforward fix (above).

Where have you shared this? What other methods are you using to draw attention?

I’ve been sharing this box render in the Board Game Design Lab Facebook group, on my website (https://www.anagecontrived.com/discover), and in some ads. Ads on Facebook have been working very well. I’ve also booked booths at some upcoming conventions (SHUX, Essen) and hope that the render will be effective there as well.

Thank you to Chris for permission to post his pictures and for the comments that he provided. Best wishes!