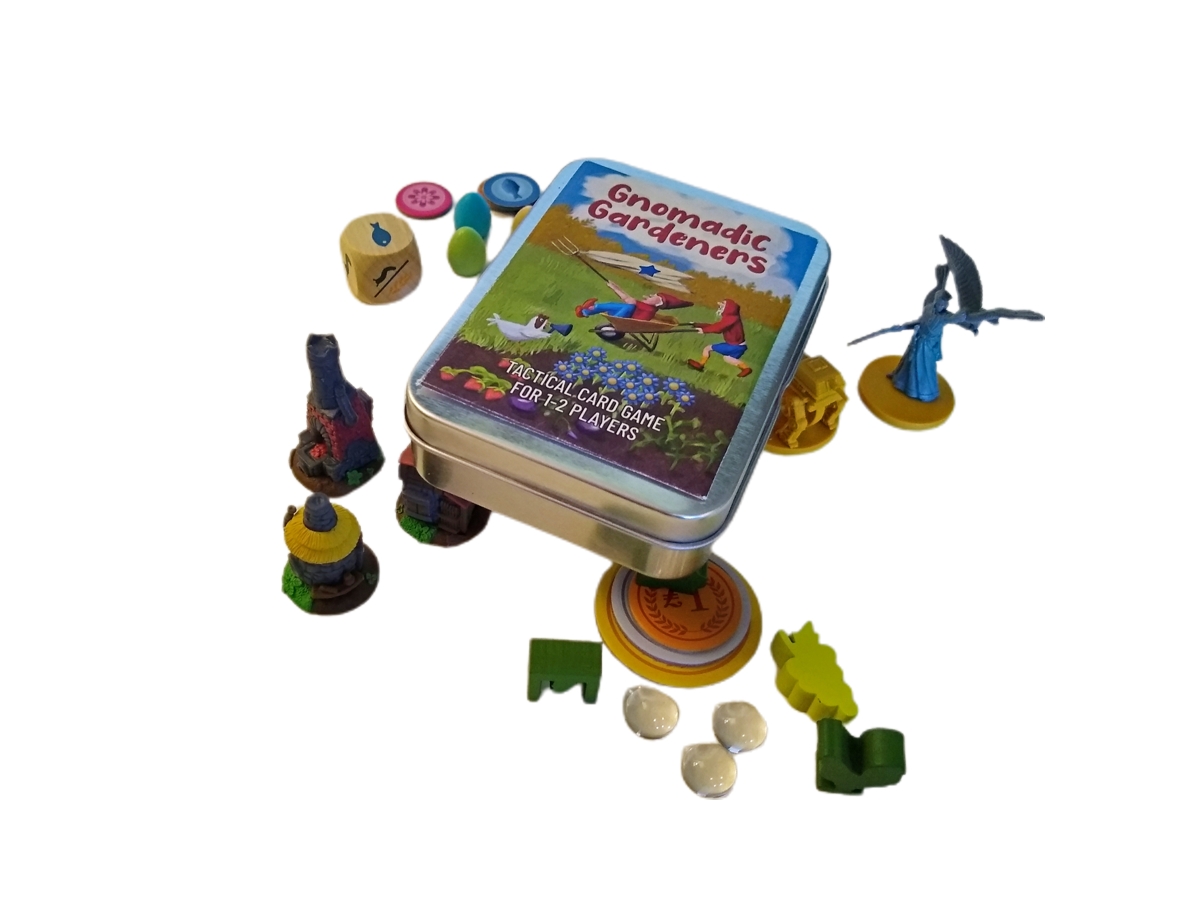 Gnomadic Gardeners launches today on Kickstarter. It’s a pocket-sized engine-builder about garden gnomes for 1-2 players. I hope that you check it out.

The launch creates an occasion to acknowledge some excellent advice from colleagues–and to draw attention to these people. I’ve tried to follow their advice as best as I can. Thanks to you all!

As illustrated by the photograph in the heading above, my success largely rests on attempting to follow the positive examples set by Stonemaier Games.

I’m an unabashedly huge fan of Stonemaier both due to many shared game-design philosophies and due my respect for Jamey Stegmaier’s massive personal contributions to the game industry.

My mental nickname for Jamey is “The Consigliere of Kickstarter” (no nefarious connotations intended, Jamey!) He literally wrote the book on Kickstarting a game. If you don’t have a copy and plan to do a Kickstarter, then I hope you literally buy a copy immediately. (Don’t worry, this article will still be here when you get back.)

He also has run an online semi-weekly book club gathering over the past few months, in which he’s answered questions from those of us still learning the ropes of crowdfunding. You can watch the replays.

Prior to moving away from crowdfunding, Jamey always aimed for much bigger campaigns than I’m hoping to achieve with my first Kickstarter (which I view as something of a practice run for larger campaigns to come). If I hit 100 backers, I’ll be a happy camper.

Despite the big difference between Jamey’s campaign goals and my own, much of Jamey’s advice has applied to my situation. As hinted in the illustration above, his expertise extends beyond the games that he has Kickstarted to include design of other games as well as publication of games by other designers. As a result, his blog posts on other topics and the hundreds of videos that he’s recorded on game design have been a huge resource.

Here are just a few ways that Jamey’s advice has affected my campaign:

Jamey’s example has influenced and impacted my career in so many other ways. Thanks, Jamey.

Jamey’s shove to start blogging led me to study Jasper’s excellent blog on Pine Island Games. There, he discusses the many challenges that he has encountered and overcome in successfully launching his first game, Nut Hunt. They’re now working toward launching SIGIL.

Jasper influenced me in a few ways:

Jasper sets a great example for focused execution. He plans big and swings for the fence, but he’s analytical and disciplined in how he pursues his goals. Thanks for your encouragement and advice, Jasper.

Jamey’s shove to become part of the broader community led me to join the Board Game Design Lab’s Facebook group, which is an excellent resource for game designers and developers. As my game approached launch, their feedback influenced me in several ways.

If you’re a game designer who likes podcasts, check out the back catalog of podcasts that BGDL recorded over the years before ending this year.

It would be hard to list all the other bits of advice that I’ve gleaned from colleagues on the web. These are in addition to specific edits on the campaign page that my friend and fellow designer Adam Michaud suggested to me. Here are some pages that I’ve bookmarked and referenced periodically, or which contain really great advice that helped me as I came into the final stretch…

Speaking of expectations, what I’ve read about shipping and fulfillment complexity convinced me to focus solely on Continental US distribution for my first campaign. I expect this to limit my potential number of backers, which in turn limits my number of copies. I reflected this expectation by ratcheting down my funding target and commensurately raising my cost per copy. I expect negligible profit at 100 copies. Nonetheless, the last thing that I want is a fulfillment fiasco. Much better a small success than a big failure!

Here’s a bit of what I’ve read and seen…

I’ll surely do international fulfillment on some future game. But if even CMON can’t get shipping in the current environment, I really don’t think it’s the time for me to learn how to do it.

With a goal of only 100 backers or so, I didn’t need to build a massive crowd. However, I did at least need to get the word out through a few marketing channels. Here’s some advice I found, in addition to the great advice in Jamey’s book.

If you’ve given me advice and not gotten a thank you above, please forgive me. I’m happy to add your name!

And thank you as well to the friends and other players who have looked at my Kickstarter page and given feedback. Special thanks to Adam, Ali, Don, Jacob, Erika and Sam — all of whom endured multiple requests for playtesting and feedback over the past few months. I’m blessed to have so many supportive friends!