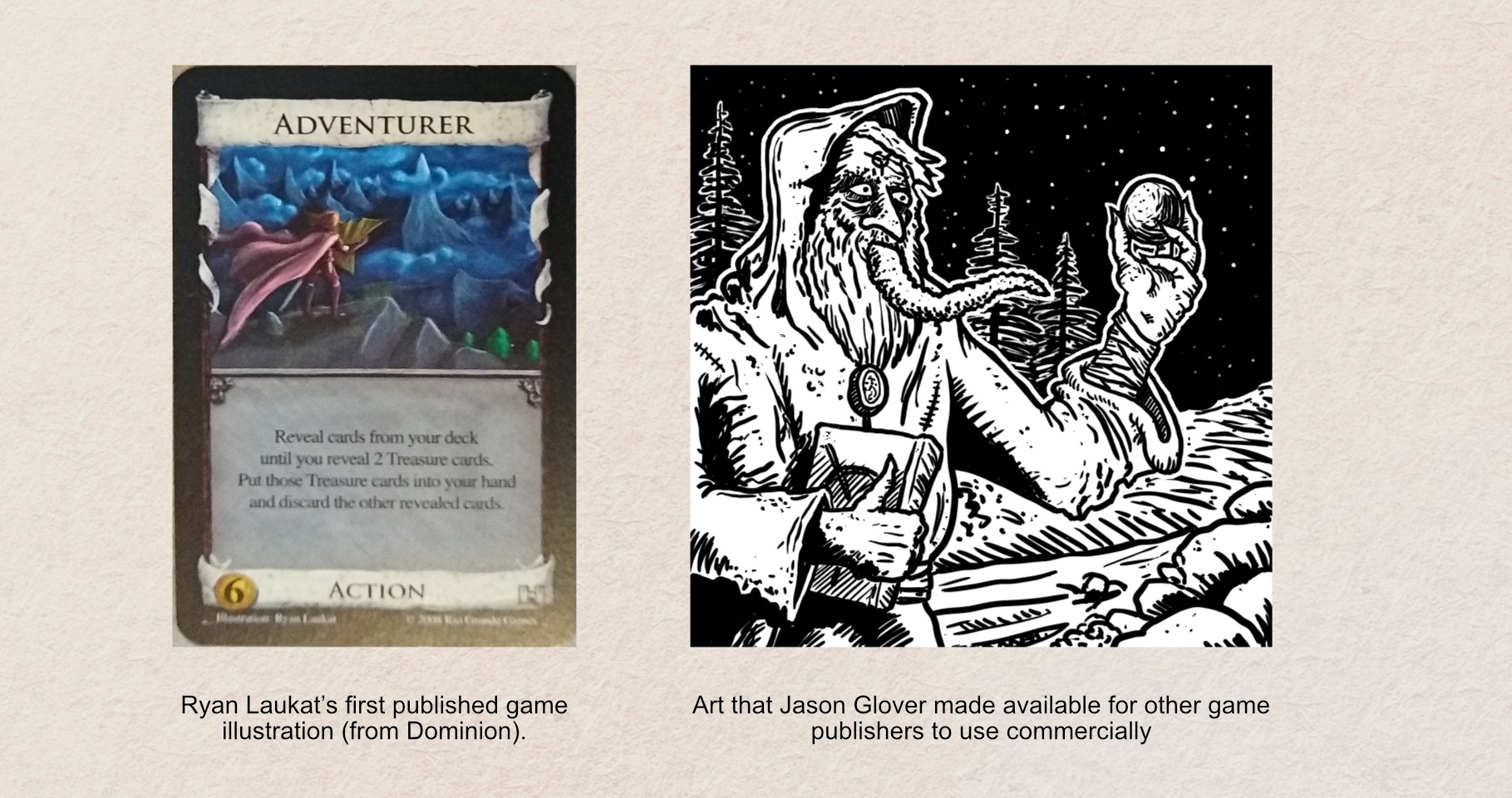 Game design is as hard as software design, requiring years of practice to gain proficiency. Game development–taking a working game and making it awesome–is equally difficult. So is digital illustration. So is graphic design.

Consequently, it is very rare that any one person has the time and energy to master all these areas. And if a game designer with poor art skills launches a Kickstarter, it has a high risk of failure.

The rationale for doing game AND visual design

Yet consider the economics. Hiring an artist to illustrate a single card may cost $70, so a game with 48 cards would cost $3360, plus another few hundred for the box, rules and other components. Right now, of the first dozen tabletop games closing soonest from now, only around half are bringing in that much money. If I’m doing the math right, the average game-related Kickstarter has brought in $28355, a figure that I suspect is decreasing over time and includes significant skew due to mega-successes. An art budget of $3000-4000 is a big proportion of such a budget.

And there are literally hundreds upon hundreds of people who do “small batch” games — delivering only a few hundred copies at most. There’s an entire Facebook group devoted to their challenges. Is it reasonable to spend $4000 on art that only 200 people will ever see? Do the math.

The path that I’ve chosen is to learn game design, game development, art and graphic design. That way, if I have a game that 100 people want me to publish, I can set aside a few weeks, make it beautiful, and get it out to the fans. I’d rather spend years mastering visual arts than spend tens of thousands of dollars on commissioning art during those years.

I am by no means the first person to cross over from game design and development into art and graphic design — or vice versa. Jamey Stegmaier’s list of his favorite graphic designers and artists includes a two people (Dann & Greg May) that also design or develop games. And I have others to add, as well.

Dann is a game developer with a knack for naturalistic art and graphic design. War of Whispers is a great example of his work.

Visuals: He designed the board and iconography. The board is an area movement map, with hand-drawn terrain and solid-colored lines to indicate regions. The board is an eye-catching circular shape (breaking with the norm). The shorelines have a nice little highlight glow to contrast with the deeper oceans. The icons are small illustrations rendered in a similar style to what I used for the resource icons of Gnomadic Gardeners.

Mechanics: Designed by Jeremy Stoltzfus, the game has a solid rating of 7.4 on BGG. The key mechanics include area majority, which is surely facilitated by the map’s visual rendering. It’s a proxy control game, where the players don’t directly command the factions. Despite the complexity, I’m not seeing much complaint that the game was confusing–a compliment to the game and graphic design.

Dann’s brother (?), Greg, is also an artist and designer.

Visuals: The brothers collaborated on Planetarium, whose planets rendered on cards are absolutely stunning. The graphic design feels very futuristic, and the iconography pops quite well. Greg also lists the Wingspan box and token illustration among his accomplishments. The Wingspan box is so clever that I have frequently referred to it for insights when approaching visual design problems.

Mechanics: Greg and Dann designed Planetarium, which has a good score of 7.0 on BGG. Its key mechanisms include Hand Management and Set Collection, so I think players spend a lot of time looking at those beautiful cards, trying to match up the icons. Aside from players feeling that the game is a bit light for their taste, I don’t see many big complaints — and, in particular, none related to confusion.

Ryan started designing prior to 2008, when his first published game illustration appeared.

Visuals: Ryan’s first published game illustration was the Adventurer for Dominion (shown at the top of this article), and he’s contributed to the expansions’ illustrations. The other big series of games that I know about is Above and Below (and follow-ons). I remember hearing an interview about how doing the illustrations took a long time, and he eventually bought a tablet that he could bring with him, in order to squeeze in an illustration here and there amid other life activities.

Mechanics: Ryan designed Above and Below, and its follow-ons. The game has a solid rating of 7.4 on BGG, and it’s one of my go-to games that I meditate upon when thinking about creating an RPG (oh, maybe it’ll happen someday). His more recent Distant Gods has a BGG rating of 8.4 — enviable!

By the way, I think Ryan’s art continues to improve to this day. The mountains and clouds on the Sleeping Gods cover demonstrate a subtlety lacking in his Adventurer card from Dominion. The surface compression of the clouds and the atmospheric perspective (both above and under the water) give a great feeling of depth. The clouds on the cover of Above and Below didn’t have the same power. Ryan is an inspiration to me, as is his ongoing trajectory.

The three gentlemen above are role models to me, but they aren’t alone, either. An ultra-quick Googling turns up quite a few other people that do game design and/or development, as well as art and/or graphic design.

Jason and Todd are every bit as accomplished in game design as in visual arts (and vice versa). The others focus more heavily on art, yet they have experience as game designers and could move in that direction whenever desired. The point is that it’s their choice, and they have nibbled in the game-design direction, too. Having become successful in one aspect of the game industry creates a safe starting point to launch in other directions, as well.