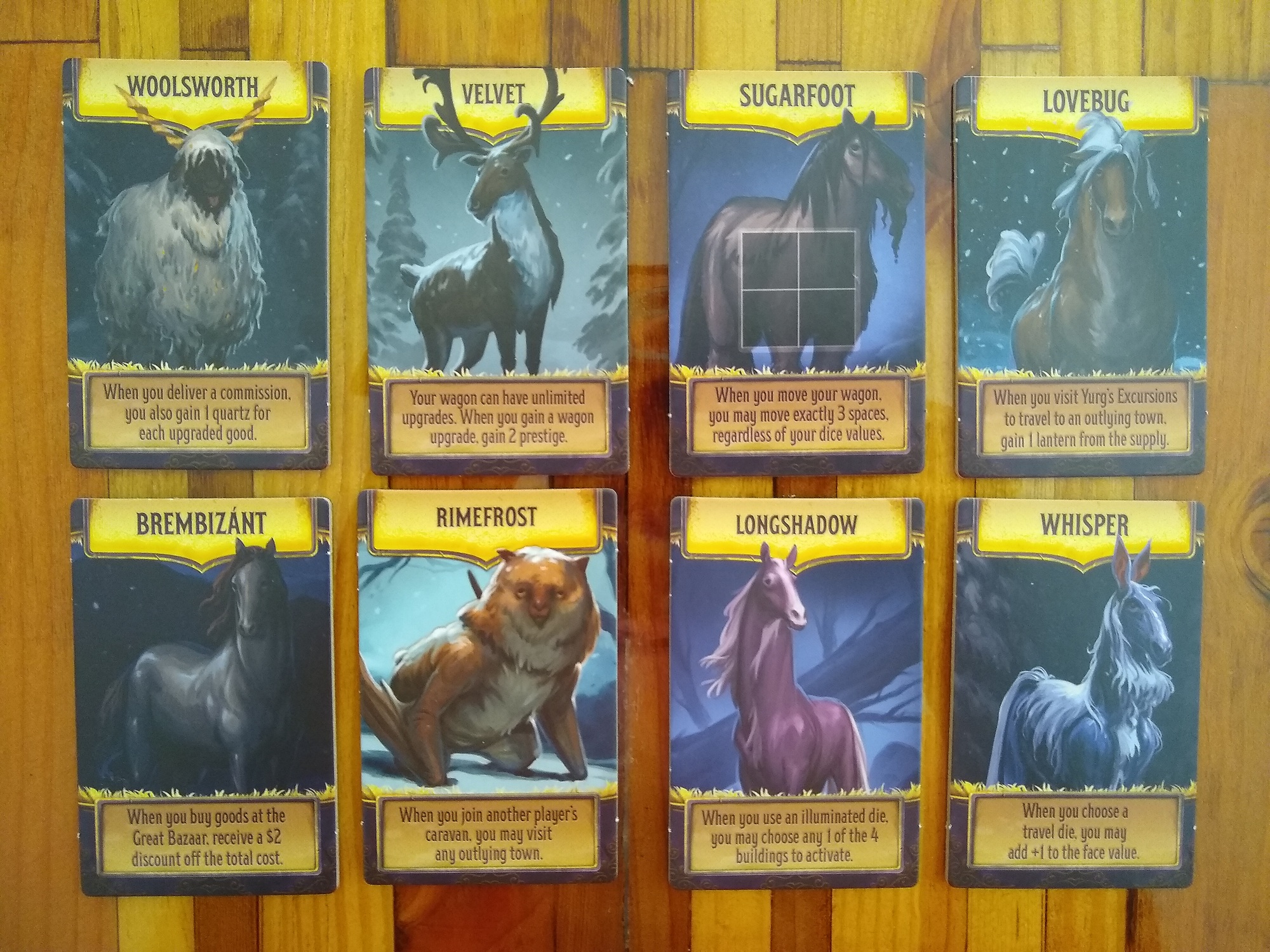 Chipboard provides an affordable means of creating 3D structures. Some games also include it for 2D shapes such as tokens, modular maps or game boards. Today, I’m going to zero in on use of chipboard for what I call “cards”–essentially, the same kind of mid-sized components that could be implemented using cardstock. They do not, for example, need to have structural integrity sufficient for constructing a 3D projection. Using chipboard is, essentially, not strictly necessary. But it does have some advantages that I’ll discuss below.

The steed cards in the $99 deluxe edition of Merchants of the Dark Road (MODR), above, are an example. These replace essentially identical cardstock rectangles included in the base version of the game. Like the other components of the deluxe edition, they look amazing on the table. In fact, I’d say that MODR is one of the best-looking games that I own.

Chipboard cards came to mind because Jamey Stegmaier recently questioned the wisdom and morality of creating deluxe versions of games. He didn’t exactly argue against deluxification. Rather, he challenged the notion that it’s only the customers’ responsibility to assess the justifiability of a deluxe version, and he stated, “When a creator has the opportunity to make something awesome that customers are actively requesting, it’s the creator’s responsibility to weigh the negative impact against with the positive.”

His position has several points of support. Deluxe Kickstarter levels can create fear of missing out (FOMO), which artificially induces people in an emotional haste to buy things (which in hindsight they might regret buying). Deluxification of the game, without leaving a less expensive version available, can put the game out of reach for some buyers. Jamey mentions research suggesting that such reminders of income inequality tend to correlate with depression. It’s easy to draw over-broad conclusions from academic research, but it’s obvious that showing fancy things to people who can’t afford them might make those potential customers sad. Jamey’s not in the business of making people sad. It’s much more logical for Stonemaier instead to find ways of selling compelling games at a price that more people can actually afford.

Jamey has grappled with related points before. For example, two years ago, he debated the cost and complexity aspects of deluxification. In response to his post, I see a lot of comments stating that what matters is quality, not just bling for bling’s sake so to speak. Jamey had previously resisted the urge to super-deluxe all the components of Scythe and opted for a moderate level of bling. Tapestry is slightly more expensive than Scythe, probably in part because of all the amazing buildings in it. The bottom line seems to be that Jamey is consistently conscientious about how much he deluxifies components, which isn’t to say that he’s entirely against it, but simply cognizant of the cost, complexity and marketing aspects (including a desire to avoid provoking FOMO).

I’ll also add environmental concerns. If a cardstock rectangle does the job of a chipboard component, then using the latter will always have more environmental impact than the former. Even leaving aside long-term impacts like climate change, Earth can only sustain a certain amount of sustainable resource extraction, for a given level of technological and industrial development. To get more of a resource like cellulose fiber, we need to cut the Earth more aggressively or wait until technology enables us to do more with less.

The short-term economic side of environmental concerns is that, given the state of the Earth and humanity, we can only produce so much cellulose sustainably. There has already been somewhat of a shortage for several months. Adding more demand only pushes up the cost of everything else that also uses that resource.

The argument in favor of deluxification

My strongest argument in favor of chipboard cards is that cardstock wears out.

Consider my most recent copy of Forbidden Desert. You’ll note that there are no bent corners, which there definitely would be if these were cardstock. I do note some abrasion on the pictures, particularly some of those near the middle on the right side below. If a game starts to look crappy, players may experience less joy while playing (especially for a thematic game like Forbidden Desert that relies so heavily on art)

Bent corners and (IIRC) a bit of water damage on cards are what killed my first copy of the game. In addition, I definitely recall a ton of abrasion on the cards where you slide a marker up and down to indicate the level of the storm; these would have lasted longer if they were instead small mats (chipboard or cardboard) with a simple wooden token.

From an environmental standpoint, having to purchase a second copy of the game because some of its components wore out is worse than if I had just purchased a more durable version of the game in the first place. Buying a second copy replaces all of the components, not just those that wore out.

Considered use of chipboard cards

Several risks threaten to kill cards: bending (up to and including tearing), abrasions, and water damage.

Chipboard helps protect against bending. These include situations where components are manipulated multiple times in the game, or at least once per game.

Chipboard helps much less against abrasion. These include situations where components rub against components, particularly multiple times in a game. In such cases, using a different combination of components (such as a token on a mat instead of a slider on a card) or a better finish could make a bigger difference. Chipboard does provide some protection against abrasion in that it’s unlike that abrasion will entirely wear through the entire card.

Chipboard helps somewhat against water damage, as it takes more water to meaningfully soak chipboard. I suppose that such situations include games involving water (in which case you’re using plastic instead of cellulose) and games to be played at a restaurant or bar–in which case, I’d probably optimize for portability and affordability, leaning toward thin cardstock over thick chipboard. It is possible to use medium-weight chipboard, of course, with a very good finish.

Comparing two components from the same game might help to illustrate these considerations at work. In addition to the steed cards (above), MODR has chipboard building tiles (below). The curvy edges look nice, but strictly speaking these curves weren’t necessary. In terms of threats to the components, the steeds and buildings are touched once at the start of the game. Nothing repetitively rubs against one of them more than the other, except for setting of a smooth die on top of the building card.

Res Arcana is another game that has a mix of chipboard and cardstock cards. The places of power were chipboard (such as Dragon’s Lair, below), if I remember correctly, while the regular cards (such as Necromancer) were cardstock. This is despite the fact that you’ll generally gain a place of power just once and then leave it on the table (potentially with tokens on it). In contrast, you more frequently take the regular character cards and place them from your hand, then may lift them and remove them. Perhaps they used chipboard anyway because places of power are mechanically more special and powerful than regular cards.

My takeaway from these considerations is to resist the urge to use chipboard for a component simply because it looks cool and/or because that component is special in terms of game mechanics. Instead, my focus will be on cost, environmental impact, and durability.

But I’ll still try to make everything look awesome because, like Stonemaier, I’m not in the business of making people sad.