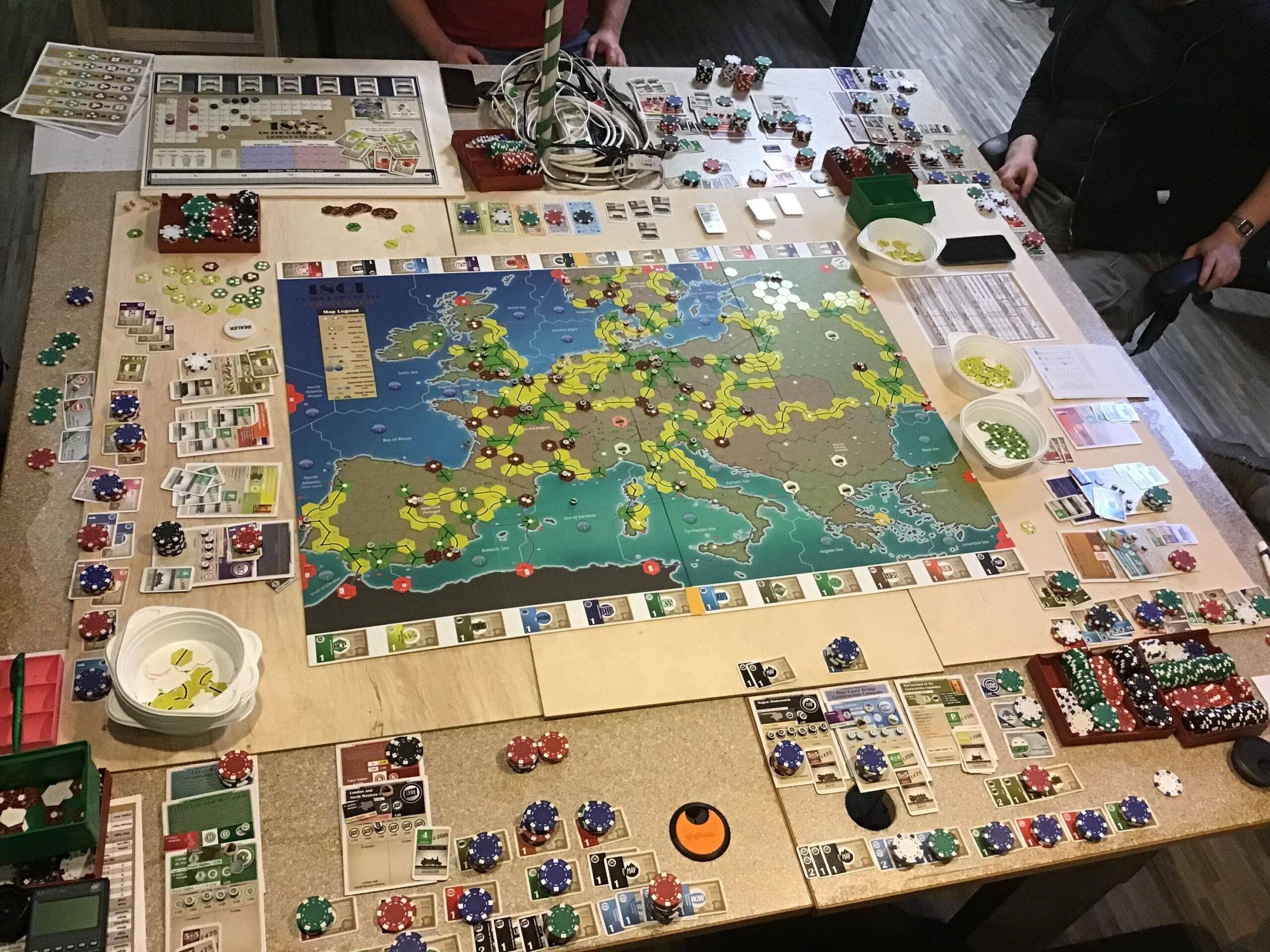 In order to increase this blog’s breadth of games with high table presence beyond the reach of my own experience, I asked the good denizens of Reddit for suggestions. I especially asked them to focus on games for which they had photos that I could repurpose here. Today and periodically in the future, I’ll type up my notes on the games that these folks shared. u/Witzman kindly gave permission to share today’s photos.

In games of the 18XX series, players invest into railroad companies that build networks around various continents. One of my favorite video games long ago was Railroad Tycoon, in which players did exactly the same. And I’m what I call a “train appreciator”–I’m not knowledgeable enough to be called a “buff.” As a result, I really enjoyed reading up on 18OE, in which players vie to develop the famous Orient Express line.

It will take up your entire table.

Right off the bat, the main claim to table presence is the enormous size of this game. The BGG entry says that in the 18xx series, only 18C2C: Manifest Destiny comes close in terms of size.

The 33″x44″ board is the most spacious component. It doesn’t have particularly snazzy art. It gets the network-building mechanism done.

It also includes over 800 hex tiles (1″ each), 350 wooden pieces/stickers, and 360 cards. That’s a ton of stuff. I can’t tell from the photos available whether the box includes a reasonable storage system to simplify packing and unpacking. One clever fellow apparently had to design his own storage trays. The box is a sizeable 12″x9″x6″. Somebody posted a photo of the box next to that of tiny Agricola. Wow.

It will take up your entire budget.

It’s worth noting that cost becomes a big downside with such a game. It apparently launched on a Kickstarter with 240 backers. The lowest level for a copy was $179 (in 2014), and these days, used copies list for over $400. Cost also comes in the form of time: Playing such a game is an all-day affair. In fact, I can imagine spending an entire hour setting up the game.

It will take up your entire wall.

By this, I mean that u/Witzman included the following photo, showing how he and friends needed an entire chalkboard to summarize the game’s overarching rules. The overall BGG rating is 8.1 at a weight of 4.55 with 286 ratings. It’s an amazingly complex game, apparently with rounds and phases.

It will take up your entire mind.

Which brings me to my last point: the players.

Although many people equate table presence with simply being big, that’s not the whole picture. Your living room carpet is big. But you don’t notice it. Not by size alone will you ever convince anybody to come look at the carpet in your house.

Nor is table presence solely tied to aesthetic qualities of the game, though of course it helps a lot. You’ve got your chipboard cards, your chipboard structures, your clever illustrations, your facial card art, your fancy resources, your plastic minis, and your over-the-top glow-in-the-dark 3d-printed castles.

Don’t miss the fact that the demeanor of the players also plays a huge role in attracting attention to the table. Seeing this photo of the chalkboard tells me that the players in this room are 100% absolutely invested in this game. They are 1800% invest in this game. Something about this game is so compelling that they have thrown themselves into it with all their minds.