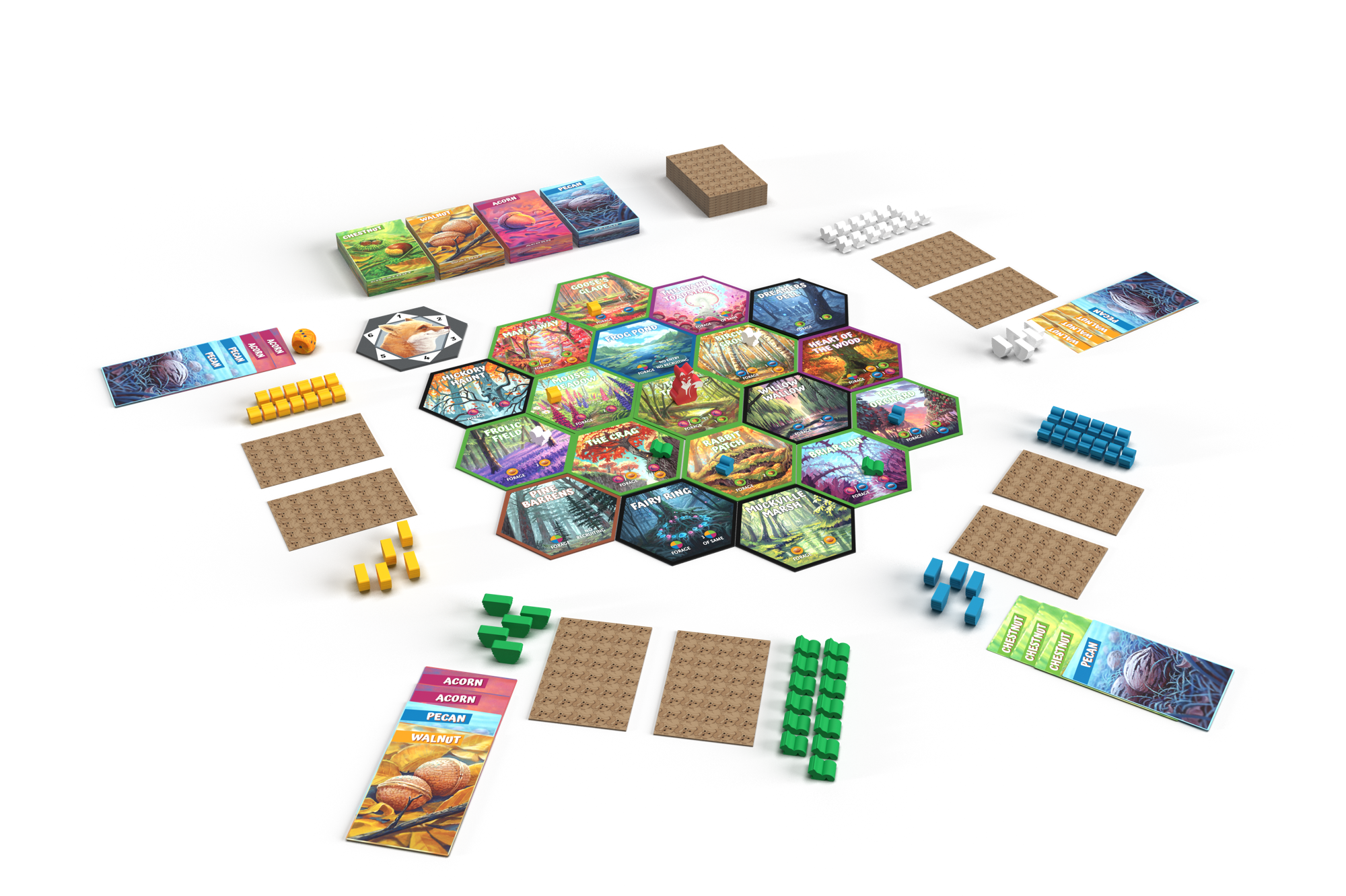 Nut Hunt, by Pine Island Games, has already funded on Kickstarter at 200% — and is now headed into the final legs of the campaign. I’ll let reviewers discuss how family-friendly and tactically engaging the game is and focus in on the key question of this blog: how the game achieves table presence. I emailed some questions to Jasper Burch, who owns Pine Island so that we can learn from his success.

Mechanically, what aspects of the game deserve the most attention of people as they play the game?

The heart of Nut Hunt is the fox. The fox is in constant motion, creating a delightful cascade of action. It is fun, engaging, and for our more competitive players, adds a deep level of strategy on top of variance – that is playing the odds, or positioning your squirrels to take advantage of a range of uncertain outcomes.

Each turn, it roams the board, scattering squirrels and causing general mischief. However, clever players will use the fox to their advantage, positioning their own critters to be scattered into hard-to-reach places, or strategically disrupting their opponents’ plans.

It is a novel mechanism from a mechanical perspective – with nearly all of our reviewers mentioning its unique application and that they haven’t seen anything quite like it. With the fox, Nut Hunt takes a tried-and-true network or route building game, and then adds an element of variance and interaction. Instead of your routes being permanent, you are now jockeying to maintain them, and planning when to end the game around your and your opponents’ positioning. The game flow is smooth and fast paced. It really keeps people locked in on the gameplay, and on the edge of their seats watching the fox move around the board, foiling their plans, or helping them lock down a key location.

What did you do in terms of table presence to reinforce this mechanical focal point and draw attention?

In Nut Hunt, the fox never actually catches the squirrels, so graphic designer Christine Santana (Wingspan, Tapestry) thought it was important to have a mischievous and in-on-the-fun expression on an adorable, screen-printed fox. It’s not so menacing. Likewise, illustrator Stephen Nickels (Broken Anvil Miniatures) spent days working on the fox’s face, which also appears on the box art, until the expression was where he wanted it.

For that matter, the box as a whole does a great job evoking the feel of the game. Nut Hunt is about motion. It’s fun, strategic, and embraces a little bit of chaos. The box illustration is full of motion. Squirrels are going every which way, leaves are falling, and the fox is at the center of it all.

When the game is on the table, what aspects of table presence get the most attention from non-players around the room?

The first thing that draws people in is the illustration. Each of our location tiles is a fully rendered immersive squirrels eye view of a larger-than-life forest landscape. The reason we hired Steve on was the landscapes in some of his fantasy character illustrations.

One illustration of Steve’s really stuck with me and sold me on him as the perfect person for the project. It’s a goblin hiking, and the environment around it is this incredibly detailed and whimsical landscape. It perfectly captured our vision for Nut Hunt.

Going beyond table presence… As you have promoted the game, what has been most successful for attracting potential backers?

Our most successful outreach has been organic. That means my blog, playing the game at conventions, TikTok, and talking about it on Reddit and Facebook. We have a growing and fierce community of supporters.

We also saw a lot of success with our review campaign. Reviews were overwhelmingly positive, and the game’s internal energy really translated to reviewers’ take on the game.

I was surprised by how ineffective our paid advertising was. Our lead cost on Facebook was well above what we expected talking to other publishers, and our conversions have been much lower than I would have anticipated. I have a number of theories as to why, and in the future, I’ll be much more careful around our use of paid advertising.

I also think we have some untapped markets, that I am excited to promote the game towards when it fulfills. More specifically there are two target demographics for Nut Hunt: 1) gateway gamers / gamers looking for a gateway friendly game for their collection, and 2) families. I think the momfluencer / dadfluencer has the potential to be a real driver of interest for that second demographic.

How did you even get attention from reviewers in the first place?

I’ve found that professionalism goes a long way in this industry. It wasn’t difficult to get reviewers on board with our campaign, but I did use a specific approach – which may help other indie publishers.

Using this structure, not every reviewer got back to me, but most did. A few didn’t have room in their calendars, and one or two don’t do Kickstarter content. But the rest were amenable.

Have you attracted any attention from retailers? If so, what aspects of the game attracted their attention?

Our goal as a company is to create evergreen titles that are a staple on the retail shelf. We aren’t interested in relying on serialized crowd funding events.

Because of this, relationships with retail is a big focus of mine and an area I’ve spent a lot of time on.

For Nut Hunt we:

And it’s paying off. In fact the only negative feedback we’ve received from retailers is that we should have charged backers more in the Kickstarter (because it would make the optics better when the game hits fulfillment and is shifted to a higher, sustainable price).

It can be really difficult to get your game in retail, especially for a first-time publisher. I am really encouraged by the foundation we are building now, and what it means for the future of Nut Hunt and our future games.